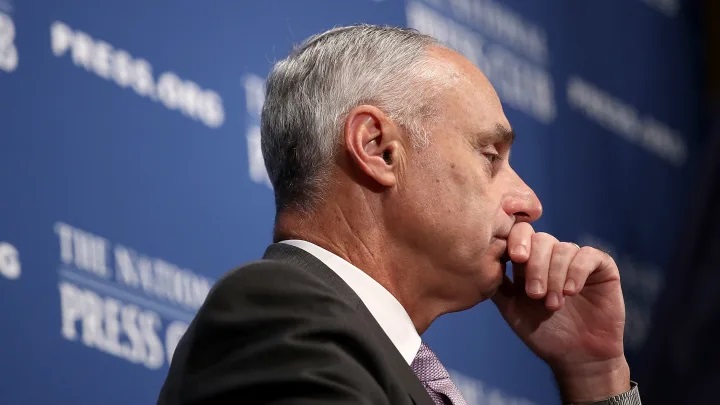 Rob Manfred is cancer to the great sport of baseball. Everything he is trying to do is destroying the game for not being done right or being completely brain dead! He’s going to cause a lock out!

1st Manfred is forcing the unbelievably BRAIN DEAD extra inning rule of a man on 2nd to start the inning. Let me make this clear IT PROLONGED GAMES AND DID NOT SHORTEN ANY! #STOPIT NOW!

Next Manfred is forcing the 7 inning double header rule. I don’t like it. NO ONE DOES! It did work to shorten games a but not enough to do anything and as such has to go.

3rd Manfred is forcing playoff expansion. THIS ONE IS ABSOLUTELY MANDITORY BUT… Only after adding 2 more teams to the league.

This is where Manfred is erring… Yes Expansion is mandatory for baseball as the MLB just had its most balanced, competitive season ever with 8 playoff teams in each league HOWEVER…

The MLB simply cannot justify it till it ads to more teams and out west!

The Tampa Bay Rays are destined to move to Orlando and become the Dreamers as already MLB approved and the East has enough teams already.

For geographic balance the 2 new teams absolutely must be out west and I propose Salt Lake City and Las Vegas as both have ownership groups formed and have already started the expansion team process.

The next one is forcing the DH on the national league.

My 1st reaction is why are we severing the differences between the leagues that make them so unique?

I will say this once: THE NL IS THE ONLY BASEBALL LEAGUE INTHE WORLD WITHOUT THE DH! IT ABSOLUTELY HAS TO STAY THAT WAY!

The better change here is allow AL teams to have the DH in NL parks and the NL teams to let pitchers bat in AL parks or let the home teams starting pitcher decide or something like that.

Pitchers love hitting people! Why take it away from them?

After seeing all this is so plain to see that Rob Manfred is CANCER to the absolutely amazing and great game of baseball!

The last one was farcing the luxury tax on the game when the Owners and players never wanted it! This has to go ASAP as its destroying the game!

Luckily for baseball Steve Cohen, Hal Stienbrenner and other owners are banding together to force it out in this years CBA.

I have this last thing to say to the MLB…. FIRE HIM NOW BASEBALL BEFORE HE CAUSES A LOCK OUT!

The MLB has simply no choice but for fire Rob Manfred!