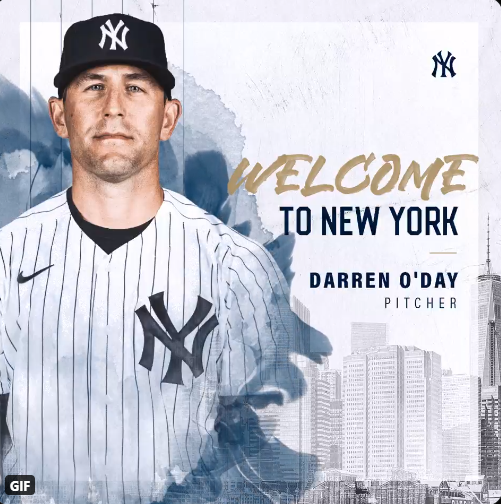 So we finally got the news we have been waiting for. We finally found out what move was happening to get new Yankees bullpen RHP Darren O’Day on the 40 man Roster.

The move was DFAing RHP Ben Heller. As no team is going to claim him he will end up out outrighted to AAA. Its a savvy move by Cashman.

As such what does this signal going forward for the Yankees offseason?

Well its most likely over. No more moves coming at this point. Cashman just buttoned everything up.

We have thought this before and Cashman then surprised. Lets see what happens…

All signs now point to no more moves coming even though we know Cashman is still talking to FA’s and teams about trades, nothing is close to or likely to happen.

Further proof of this is confirmation of what I have been saying all along in that the Yankees are making no efforts at all at signing OF Brett Gardner.

As I reported all along as well they haven’t even tried to contact him since telling him off back in October.

This is very, VERY telling. The Yankees have actually moved on from the long time Yankee. Its about time as well!

The Yankees also moved on from 7 year Yankees starter Masahiro Tanaka and are far better off for it!

It fully appears now that the Yankees are done making moves. We’re 6 days from pitchers and catchers reporting after all.

I will say IF the Yankees make any more moves then the perfect trade fell in Cashman’s lap or its a very, VERY cheap FA signing. It appears done!

Cashman is still working hard but only big, major additions or cheap FA’s signings are going to happen at this point. IF THEY DO AT ALL!

As the Yankees appear done they get an A- from me for the offseason. The only way they could’ve done better was lefty power bats and a 2nd ACE such as RHP Luis Castillo or LHP Sean Manaea.