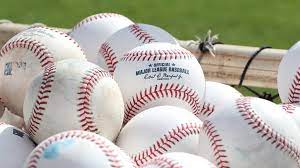 Here is a list of moves done in the 2022-2023 MLB offseason THAT WILL BE UPDATED ITH EVERY NEW MOVE!

Rockies acquire RHP form the Braves and Braves get OFer from the Rockies:

LHP Carlos Rodon has opted out of his deal with the Giants and is a FA:

BOTH SS Xander Bogarts and SS Carlos Correa have opted out of their contracts and are FA’s:

The Nationals opt out of Contract with DH Nelson Cruz making him a FA:

3B Nolan Arenado refuses opt out and stays with the Redbirds:

Yankees 1B Anthony Rizzo ops out becomign a FA:

RHP Jake DeGrom opts out and becomes a FA:

RHP Roberto Suarez opts out and is a FA:

ALL TOP REPORTERS HAVE CONNECTED RHP/DH SHOHEI OHTANI TO THE YANKEES:

RHP Aaron Nola stays with the Phillies as team picks up option:

Rockies decline option on Scott Oberg making him a FA:

Phillies claim 2 players from the Giants:

Braves swap pitchers with the Rangers:

OF Aaron Judge and 1B Anthony Rizzo get QO’s from the Yankees:

Tyson Miller heading to the Brewers and Andy Ibanez to the Tigers:

Braves not spending at all?

Guardians and Diamondbacks make a trade:

Another EX MLBer heads to Japan:

Mariners get Teoscar Hernandez from the Blue Jays:

Mets make trade with the Marlins:

Gio Urshela traded to the Angels:

MORE ON THE GIO TRADE:

Brewers get pitcher from Rays:

Pirates claim 1B from the Marlins:

Angels get OFer from the Brewers:

Pirates at 1B: Carlos Santana:

Miguel Cabrera retires EFFECTIVE at the end of the 2023 season:

Franchy Codrero to the Orioles: