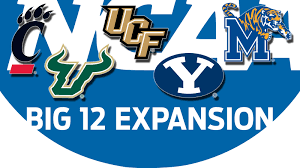 Big 12 expansion has been a subject of internal conversation over the past month. Multiple sources tell @max_olson if the Big 12 does stay together, its focus is on building the strongest football conference it can.

As you can see its believed all but USF were actually made official offers to join the BIG 12. USF officials say they are working with the BIG 12 to also get an offer. If that happens I fully expect Houston to be added as well and the BIG 12 to move to 14 schools.

This would save the BIIG 12’s auto big into the CFP (College Football Playoff) and keep major balance throughout college football.

I took the liberty of asking around the BIG 12 schools presidents at the likeliness of expansion actually happening to the BIG 12 as was told emphatically would absolutely love expansion and keeping the BIG 12 going.

High ups in the BIG 12 firmly believe expansion is the best course and thus the very quick shift to adding schools/. Stay alert as more info will be coming out very, VERY soon!