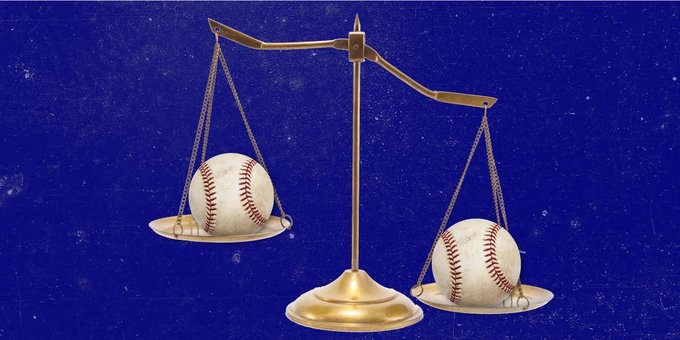 As he have recently heard, the MLB has admitted to using dead balls and live balls depending on the team and television station airing the games.

MLB used two different balls this year without telling clubs or players, per @BWDBWDBWD. Hugely fucked up, and a massive labor issue just as baseball is about to go to labor war: https://t.co/ygf6KVZ1ic

But what effect did this actually have on the game?

Well 1st off you have to understand what the dead balls, reg balls, and live balls and geared and made to do.

DEAD BALLS: Made to deaden ball flight. Caused a massive, MASSIVE spike in ground balls. Makes a hitter lose up to 50 FEET off their ball flight. Explains all those bizarre fly balls that should’ve been HR’s then did not get out non huh?

LIVE BALLS: Designed ON PURPOSE to increase ball flight up to 100 feet. Even on line drives. Slightly lighter and tighter bound ball. The average hitter saw AT MINIMUM of 25 feet added to their fly balls when hitting these and on average of around 55 feet. Explains all the fly balls that literally impossible got out…

Now that we know this, HOW CAN WE TRUST ANY PLAYER’S STATS FROM THE 2021 SEASON AS BEING REAL ABDLIGIT OF THE PLAYERS ABILITY?

The impact this has had on the game is astronomical! We cannot trust a team like the Giants even wins 70 GAMES when we know they were swinging at live balls all year. Their pitchers were only pitching with dead balls. Same with Jake DeGrom (MANFRED ADMITTED HE’S BEEN ONLY BEEN PITCHING WITH DEAD BALLS FOR THE LAST 5+ SEASONS), The Rays, The Redsux, THE CARDINALS, THE BRAVES, ETC.

No baseball fan can trust ANYTHING about the 2021 season. DO the braves even make the post season without the balls rigged for them?

Baseball has to pay BIGTIME for this fraud. It must start with Manfred’s firing! Then bringing back the normal balls!

Just think of this, the dead ball causes a would be and should’ve been walk off HR to stay in the yard giving the Braves a win, THIS CAUSES A 2 GAME SWING IN THE STANDINGS from say 59-41 to, 60-40. THIS IS A ASTROMICAL DIFFERENCE! Or Say Altuve’s big HR’s against the Yankees NEVER GET OUT AND THE YANKEES WIN THOSE GAMES. That’s a 6 game swing for the Yankees form 92-70 to 98-64. Then the Rays pitchers actually pitch normal allow the Yankees to win a few games and BOOM. YANKEES RUN AWAY DIVISION CHAMPS!

Are you starting to see how the game was rigged in 2021? How all the bizarre impossible, physic and gravity defying ball flight’s can now be explained? HOW THE YANKEES ABSURD AMOUNT OF GIDP’S MAKES SENSE NOW?

DOES IT NOW MAKE SENSE HOW STATCAST ANDNOTHER METRICS WERE SO OFF?

It also explains certain elbow injuries with players switching back and forth as the regular and dead balls ARE HEAVIER thus putting extra strain on the elbow and should ligaments, muscles etc.! This also explains how a pitcher gets literally impossible pitch speed increases as the live balls are that much lighter! Like pitching with a little league ball.

I guarantee you lawsuits are coming. The MLB will pay big time!