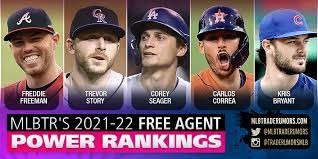 As we roar towards FA its time to start looking at the upcoming FDA’s and where experts think they will land. Lets take a look:

A very interesting FA who has had a horrific break up with the Mets. He will not be back. So where is he heading?

Prediction by experts: Dodgers to play 2B for 8 years $258 Million

Is he a regression candidate? Is he really this good? Only time will tell!

He is 100% eyeing the Yankees and vise versa. Easy one here. Joel Sherman even confirmed today the Yankees will be all over Seager!

He’s not leaving Atlanta! NO CAHCNE! He’s also 32 so not much FA value.

So many teams want him but few actually expected to pursue him. This will be a interesting one.

Coming off an impossibly good year he expects a massive, MASSIVE contract. Will he get it?

He has emphasized he will stay on the West Coast. He’s likely staying a Dodger.

Is there really a chance he leaves NY? I don’t think so. He loved NY and is best friends with AARON JUDGE now.

A intriguing FA for a lot of teams. Plays everywhere but destined for a DH role.

Coming of TJ and didn’t look that good in his only few outings this year. What can he even demand?

A big time hitter looking for a monster contract. Which team will bite?

He very attractive piece for any contender. A major come back year. Can he prove it wasn’t a fluke?

The M’s have already declined his option is the word around baseball. He is interesting but at 33 more of a role player.

Older player at 33+ now.  Can he really help any team win at this point? What does he really have left?

A very interesting player hits FA here. No info out at all about him as far as Interested teams yet. I will wajor a guess based of his history but yeah unknowns abound here.

Odd player here. A good reliever but not a lot of teams even think highly of him. Should be a interesting FA to watch.

Expected Contract: He is demanding 5 Years $75 Million or there abouts.

Likely not going anywhere. He loved being a Giant. Good enough several teams will take4 runs at him!

I good player coming of a trade to the Braves and playing very well. Should get a good contract.

A good pitcher who wants to stay in NY. Yankees have no interest so…

Coming off a great post injury year with the Yankees. He deserves a multi year deal but to be a middle rotation guy.

A very good OF looking for a long term deal. He should get it but has injury issues.

A older but still good oft tossing pitcher. He should find some team to grab him.

Still one of the top 3B in the game but saw very sharp declines in ST Louis. He is fully expected to opt out!

Prediction by Experts: Dodgers for 8 years and around $200 Million

There you have it! The top 25 Free agents with their prediction destinations AS OF RIGHT NOW! I really, REALLY, REALLY hope to see most happen but some I don’t see happening!