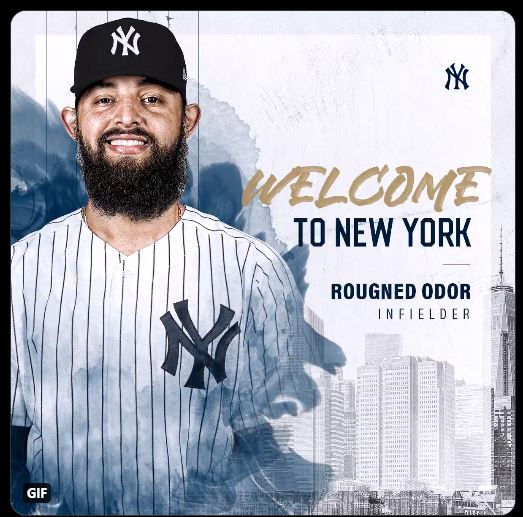 The Yankees have made an extremely rare early season trade, completely out of their caricature, for lefty hitting power hitting INF/OF Rougned Odor. This is a GREAT, GREAT get! Lets talk about why.

The New York Yankees announced that they have acquired INF Rougned Odor and cash considerations from the Texas Rangers in exchange for minor league outfielders Antonio Cabello and Josh Stowers. A corresponding 40-man roster move will be made later today.

The Yankees got him for nothing as the Rangers are eating his contract. How did Cashman get the Rangers to do this?

Yankees are paying zero of Odor’s salary, not even the minimum. His pay is $12M this year. Rangers got 2 prospects rather than salary relief.

Its lowering the Yankees luxury tax $ by over $1 Million.

Its adding a proven lefty power bat that is extremely needed while all signs booting a player in Tyler Wade who can’t hit worth crap!

They traded 2 prospects i OF Josh Stowers, and C/OF Antonio Cabello who were never making the Yankees as well.

The other plus here is Odor has always BEEN the protect and batter lower in the Rangers lineups. He’s never had good stuff to hit. HE WILL WITH THE YANKEES!

Why wouldn’t the Yankees grab a great YOUNG AT STILL JUST 27, payer for ABSOLUTELY NOTHING?

Its a no brainer! The Rangers are literally PAYING HIM TO PLAY FOR HE YANKEES!

Just imagine him getting all kinds of stuff to destroy into the RF porch batting between Judge and Stanton? YIKES FOR OTHER TEAMS!

This is the most no brainer move for Cashman ever! Easy decision. Also makes cutting Wade a no brainer. He’s going to make Yankee Stadium seem very, VERY small!

For example here’s his 2014-2018 spray chart which shows 53 more HR’s if in Yankee Stadium (several down the left field line which is kinda odd): 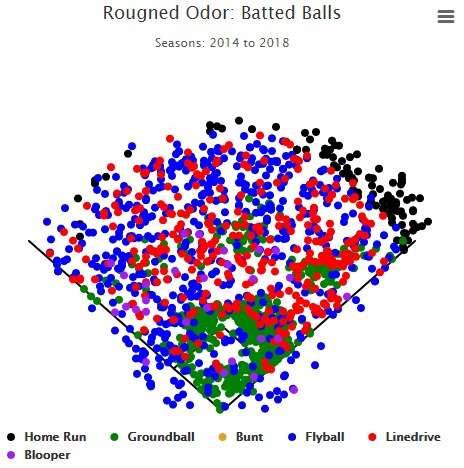 He’s a perfect fit for Yankee Stadium and to provide some lineup balance!

I do expect a DFAing or another trade very soon. Pay attention as a 40 man more must be made for Odor. If I had to guess its Wade getting DFA’d.