All you have to do is ask Judge or Stanton’s agents and those around them and the truth comes out. The MLB is blatantly, BLATANTLY faking and forcing the faking of Aaron Judge and Giancarlo Stanton injuries to further the MANUFATCURING, fakeness of Trout being the MLB’s best player! Same with forcing Cary Sanchez to play far worse then he is!

No player gets injuries like these! Not even the most injury prone payers in history! Thus emphatic proof, THEY ARE FAKED!

It couldn’t be more obvious. These best in the world trained athletes, with the best trainers in the world, simply cannot  have MUSCLE injuries every year like this! That is literally impossible! Its a known fact all pro sports league’s force teams to fake injuries. Here’s why the MLB is forcing it here:

About 12 years ago while working for the AA Provo Angels (Before they became the Orem Owls) as a hitting coach, a prospect named Mike Trout showed up.

(NOTE: I would be stunned if Trout or any other player or even coach there at the time remembered me. No one remembers minor league coaches.)

He was a terrible hitter and so-so defender.

I started working with him with the other hitting instructors. I instantly noticed he couldn’t hit anything but cookie pitches. Hangers. However, I continued to work with him. We got him to be a .300 hitter and boom he was gone to AAA Salt Lake.

The AAA hitting coaches labeled him a average at best player. Then he gets called up to the BIGS and boom he’s getting hanger cookie pitches EVERY FREAKIN AB!

HINT: He still is.

Then out of where he started getting called the best player in the game and given a completely unearned MVP. Then a 2nd and now 3rd… He’s never done anything to get even 1 MVP vote!

WHY? WHAT DOES THE MLB HAVE TO GAIN FROM THIS FRAUD FAKARY?

You get why they are forcing Judge and Stanton to fake Injuries and Sanchez to play worse then he is now? Its easy! To make the BARELY ABVOE AVERAGE PLAYER Mike Trout look like the best in the game!

If trout wasn’t getting cookies every dang AB he would be a .270 hitter AT BEST!

Any player getting the cookies EVERY AB that Trout gets would look that good.

In the defensive side the MEDIA makes every above average but EASY play Trout makes seem like the catch of the year creating blatantly, BLATANTLY fake narrative of him being this best in the game defender when he isn’t close if you really look at it.

Also what other player in history just happens to debut as stats are created that make him, AND ONLY HIM, seem 100’s of times better then he is as Metrics are rigged 100% for Trout have done?

Take the WAR stat for example. Its said Trout has the highest WAR in history when not only is that not close to true but if WAR wasn’t rigged as all get out to make Trout look good, Babe Ruth WOULD LITERALLY have a WAR well over 1000!

No other player in the history of the game did what Ruth did in putting up #’s every year WHOLE TEAMS WERN’T EVEN DOING! Ruth averaged 53 HR’s a year for 8 years when TEAMS AS WHOLE’S were only hitting around 28.

That alone should’ve given Ruth a 100+ War per year BUT… Babe Ruth hit more Home Runs then ANY THER TEAM AS A WHOLE IN THE GAME for 16 straight years! NO OTHER PLAYER AS EVEN APPRIACHED THIS! No other layer has even done this once!

Metrics are 100% rigged crap that need to go ASAP!

Another example is Sammy Sosa when I put him through the WAR formula that calculates WAR, he ended up at 503. That is how massive the affect his 7, MLB RCORD SEVEN straight 40+ HR seasons with 3, MLB RECORD THREE 60+ HR seasons and ANTHE MLB RECORD, 5, FIVE 50+ HR seasons IN A ROW had.

Metrics are so rigged and need to go ASAP!

Now, back to Judge, Stanton, and Sanchez, if not for being forced to fake injuries ALL OF the 3 of Them would put up stats making Trout look pathetic!

HOW WOULD THAT LOOK TO THE MLB THAT’S WRONGFULLY TOUTING TROUT AS THE BEST PLAYER IN THE GAME?

That alone is proof the MLB is blatantly rigging things but only part of the picture.

To explain it better all 3 of Judge, Stanton, and Sanchez project to perennial .300+, 50 HR+, 150+ RBI guys if not purposely faking injuries and swinging at blatantly crap pitches that suspiciously TROUT HAS NEVER SWUNG AT!

The same thing is now going on with Voit as he looks like a threat to Trout.

Also going on with Otani and his numerous injuries out of nowhere.

Robinson Cano even had a PED’s allegation as he was proving better then Trout.

Now Gleyber Torres who was proving better then Trout is having defensive issues out of nowhere!

Tatis Jr. suffers a “MAJOR INJURY” right as he is proving better the Trout.

Even That grossly over ratted, KNOWN PED USING, JUICE BALL EFFECT, Pete Alonzo has a injury out of nowhere when he proved better the Trout!

EVEN Prince Fielder JUST HAPPENS TO HAVE A CAREER ENDING NECK INJURY WHEN HE ROVES FAR BETTER THEN TROUT COULD EVER HOPE TO BE! WHO EVER HAS SUCH INJURIES???

WHAT IS GOING ON HERE?

Answer: A coordinated effort to BLATANTLY WRONGFULLY make Trout look EXREMELY FAR better the he is!

Something is very, VERY wrong with baseball and it all coincides with Manfred becoming Commissioner out of nowhere.

As did the evil and illegal bias against certain teams winning the major baseball awards since Manfred took over. This has blatantly rigged these awards from the following players who rightfully won them:

This is a small, SMALL part of the list! I haven’t even gone over, and won’t go over the NL ones…

Manfred is literally a cancer to baseball!

The MEDIA is a cancer to baseball and sports the way the throw #’s around rigging contracts against MLB teams, awards against players and such.

Something has to be done to fix this!

Its also on the umpire side where Trout has the smallest strike zone in the game against him. Its not just umpires rigging for him as proved here:

I even have umpire friends telling me when games are rigged guys!

FYI: This is about the Mets OF Michael Conforto getting away with ILLEGALLY, purposely leaning into a pitch to get hit by it. By rule is is out and ejected from the game for such an act.

In fact its likely Steve Cohen the Mets owner even paid for this rigging as my umpire fiend says:

This is major stuff. Same thing about the Yankees game last night: 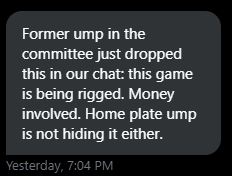 Then about 40 minutes after I received this message Hicks gets a called strike on a obvious ball, years late and the HP umpire looked incredibly awkward calling it.

All an umpire has to do to rig a MLB game or any baseball game fo rthat matter is purposely make the key close calls in favor of the team he wants to win. Especially when calling balls and strikes.

The MLB is a complete mess and something has to be done to save it ASAP or it will go down with the NBA and NFL!

The start of fixing the MLB is firing MANFRED ASAP and finding a commissioner who will stop with the brain dead rule changes and take baseball back where it belongs.

After that, not sure outside installing suspensions on umpires for not calling games right or making purposely bad calls. Again I point back to my article about fixing the umpiring in the MLB.

No matter what the necessary changes are, things have to happen now!