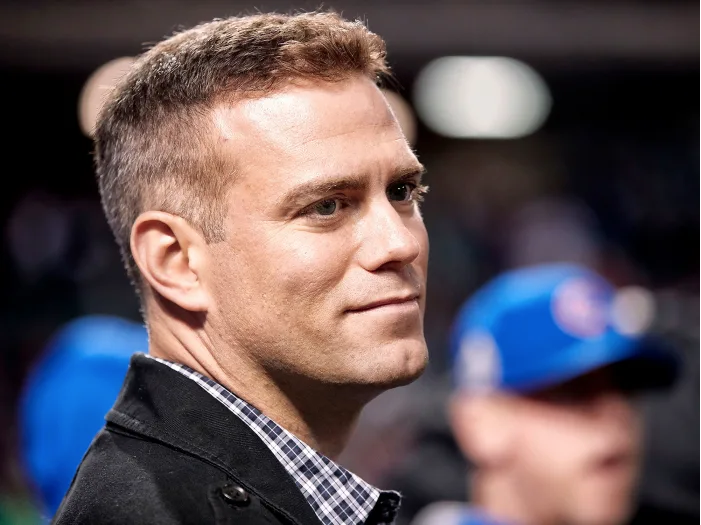 I got the chance earlier today to ask the one and only THEO EPSTEIN some questions. Here’s the short interview:

1. How are the negotiations with the Yankees going on potentially landing there?

Well Adam… I have had some conversations but I can’t full speak publicly while they have an active GM. They have offered me a different role where I could transition eventually into a GM. Always a dream to be there and I’m buying a home in NY.

Are you for or against pace of play rules?

I like them to an extent. Depends where you do it. Thinking about making managers throw during times you’d use position players or making pitchers have to hit if it gets to that. Counterintuitive but it’ll start to weed it out while making the game fun. Now we are aware, actually thanks to you, about the bull bukake situation from Japan and we will be investigating Kyle Farnsworth further. So thank you.

Are you working to get the luxury tax out of baseball?

Oh yeah. I mean it’s like so totally stupid. We aren’t the NBA. These are billionaires and they need to act like it. Fans deserve better!

What moves do the Yankees need to make in your opinion and Cubs as well?

So the Yankees I know have a big acquisition long term coming soon. They also are going to aggressively push for Ian Happ, after judge salary is announced (YES AS YOU WERE TOLD BY OTHER SOURCES ITS GETTING DONE). Yes the Yankees know what it’ll be. Cubs are gonna sell. Relievers, two starters, and some of their bigger contracts (The King Source Says: I presume Contreras, Suzuki, and a few others!). Heyward to the highest bidder. Braves are working to put together a MASSIVE offer to the angels for Mike Trout and ownership may consider to fill many holes.

Advice for me in my business?

Keep doing you. We had no idea how you got the leaks you did during the lockout and we are perplexed at times when you have information we have yet to release but keep up the good work. You may have a future in this that’ll make you very rich. I will promote you with my new team and we will try to get you streamed in during a broadcast if you keep up the good work.

Some awesome stuff there. Tells a few things but I will keep them to myself.