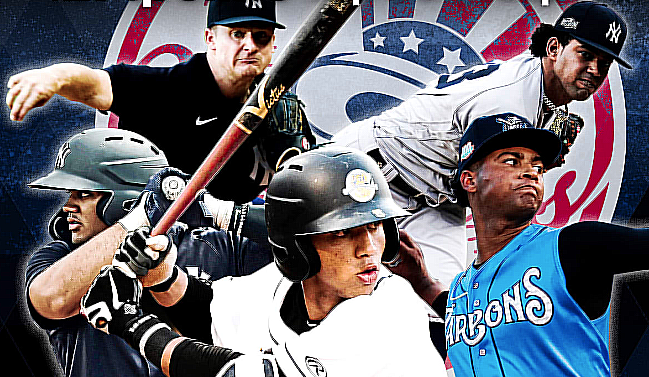 Lets take a look at the Yankees top 25 Prospects and there tradability. I will give THE KING SOURCE‘S OFFICIAL rankings on the as well:! I add in stadium factor and ability shown thus far.

He is a riveting prospect for the Yankees. A mega POWER BAT of the likes the Yankees have not had since Cano. 100 times better. A high average bat with as much power as anyone. His pop outs will get out of RF in Yankee Stadium. Both Brian Sabean and Omar Minaya LOVE HIM! Legit chance at starting in LF FOR THE YANKEES to start the 2023 season though unlikely.

MLB COMPARISON: THERE IS NONE RIGHT NOW! He’s that unique a talent! He’s big and tall like Adam Dunn and Chris Davis but has proven he can and will hit for high average!

TRADABILITY: 0% chance he is ever traded!

Easily the Yankees top pitching prospect. High 90’s fastball with great breaking stuff. Already near the Majors. Will be a dominant reliever with a chance to be a starter as well.

TRADABILITY: 50% with a good chance to be dealt.

The Yankees opening day SS as of right now. Showed all kinds of promise during his 2022 MLB run. GREAT POWER for his size. Shows the ability to hit for average and tops in the game defense for SS.

A great looking prospect who may be overrated. Shows amazing pop from both sides of the plate with the ability to hit for average. Great OF range and as strong an arm as they come.

TRADABILITY: 50/50! Could easily be traded though the Yankees love him!

A top OF prospect in the whole game. As much range as anyone. So-so arm. Great average bat that shows great power. Tons and tons of promise here.

A weird and grossly overrated prospect. He has shown nothing to prove he can play SS. He projects 100% as a 2B or weak hitting 3B. Not a great average or power bat yet either. Very strange prospect.

TRADABILITY: 50% Its higher then people think though unlikely. Neither Sabean or Minaya like him.

A promising young prospect for sure. Legit chance to be the opening day LF for the Yankees just like Jones. Great, GREAT power bat with ability to hit for average. Very good range and arm. His defense is perplexing though as he’s yet to completely prove himself as a catcher. Plays very good LF and RF as well as satisfactory 1B.

TRADABILITY: 0%! Not going anywhere! Yankees love him far to much to even think about trading him!

The Yankees love, LOVE, LOVE this kid! Towering powerful lefty hitting INF! Currently playing 2B and excelling there. Flying through the system.

TRADABILITY: 0%! No chance he goes anywhere! The Yankees love him and view him as the next Robinson Cano!

TRADABILITY: 25%! The Yankees would love to continue to develop him but would trade him in the right trade.

A interesting player coming of TJ after dominating in the MLB. If he regains his form he’s as good as ANY PITCHING PROSPECT in the game. He’s exciting to think about but very likely to be traded.

A great young prospect and future EVERY DAY SS for the Yankees. All kinds of power. Cannon for an arm topped only by O’Neil Cruz. Great strength and ability to play SS.

TRADABILITY: 0%! Besides the fact he’s yet to hit the games played plateau to be eligible to be traded, the Yankees are drooling over his switch hitting abilities in Yankee Stadium!

Another fire balling dominant pitcher in this Yankees farm. Hits 100+ MPH regularly. Most of the time in the 97/98 MPH area though. Great breaking stuff.

TRADABILITY: 80% The Yankees love him but would part with him in the right trade.

Another promising young pitcher in this Yankees farm. A dominant reliever at the Single-A level and working his way up. Great size and strength with it. Little raw but developing great.

TRADABILITY: 0%! Not enough games played to qualify for trades.

Yet another power righty in the Yankees farm. Like Vrieling towering presence and Strength at 6’5″. Is flying up the system.

TRADABILITY: 0%! Not enough games played to qualify for trades.

MLB COMPARISON: Adam Dunn BUT WITH THE ABILITY TO HIT FOR HIGHB AVERAGE!

TRADABILITY: 0%! The Yankees love, LOVE him far to much to even think about trading him. Grabbed him form the Phillies at 1st chance ON PURPOSE!

A great young catching prospect. Great arm and blocking ability despite his size. Will make the majors soon (By the end of 2024). EASILY the best catching prospect the Yankees have had in years.

TRADABILITY: 0%! As of right now he’s going NOWHERE FAST as far as trade’s go! The Yankees flat out love him!

Yet another great young pitching prospect for the Yankees. Another fireballer but extremely raw. He is on the 40 man thus a trade candidate. Struggles with control at times. Will be a dominant reliever. Does not project as a starter at this time.

TRADABILITY: 60% could easily be traded or kept by the Yankees

The 1st (AND ONLY ACTUALLY) LHP in my rankings (DON’T WORRY THE YANKEES HAVE TON IN THEIR MINOR LEAGUES WORKING THEIR WAY UP). He’s a strike out MACHINE! Nasty as all get out changeup, filthy slider, with a high 90’s fastball. Great reliever in the making though wants to be a starter.

TRADABILITY: 50%. The Yankees love his stuff and see him as a mainstay in the bullpen. Likely trade candidate though.

Another pitcher with MLB experience still considered a prospect. Has shown great, GREAT ability to pitch in the MLB. Still needs some developing though.

A perplexing prospect for sure! Great, GREAT power bat with ability to hit for average. Proved that batting batting .283 with 20 HR’s in 2022. Great young talent but has struggled defensively.

TRADABILITY: 50/50. Unsure he has trade value but teams love him. The Yankees as well.

Another absolute fire balling young righty in the Yankees farm. Great stuff all around but still learning control. Could see the majors IN 2023! Is on the Yankees 40 man.

TRADABILITY: 80%. Extremely likely trade candidate. Teams love him and will pay to get him.

A interesting prospect here. Very good power but yet to prove the ability to hit for average. Development going great but needs more. Max range defensively and great throwing arm.

TRADABILITY: 80%! Reeks of being trade bait due to all the OF’s blocking his way to the majors!

Another promising LEFTY HITTING power bat. Good OF range. Average arm but showing signs of getting stronger. Will be a MLBer of his progression continues on current pace.

MLB COMPARISON: Kyle Schwarber but with the ability to play great defense.

TRADABILITY: 0%! Nowhere near enough games played to be traded.

Another cannon arm for the Yankees farm. Very, VERY raw still but coming along. Good control. His fastball needs work. His change up is his best pitch. Excellent slider as well.

TRADABILITY: 0% Hasn’t pitched in enough innings, games or well enough yet to be on trade radar’s.

One of the few ambidextrous players in the game. Mainly throws RIGHT HANDED for catching. His bat is coming along but his defense is far ahead of his bat. Looking like a sure fire MLB backstop but still, even after 5 years in the minors remains a raw player. Coming along fine though.

TRADABILITY: 0%! No chance he is ever traded. No trade value and the Yankees love his abilities.

There you have it. The #25 Yankees prospects ranked WITH ACCURACY by THE KING SOURCE!