There’s a major, MAJOR lie going around the game that a MLB tam only has a title window of around 5 or 6 years. This is a blatant lie! Allow me to how why. 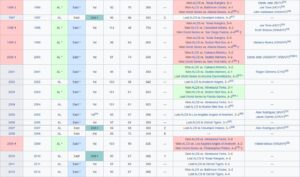 What do these 2 tell you? How about another one? 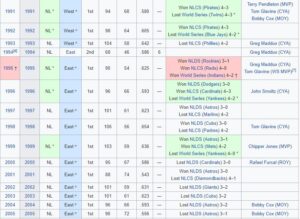 The Braves had a clear 1991 through 2005, 15 year title window. Why they didn’t win more then 1 only heaven knows! Butting heads with the Yankees twice didn’t help either.

As you can see it a team reloads and replaces players right they could have a never ending title window.

Lets take the current Yankees for example. They look like this as of right now:

All can easily play and be effective AT LEAST another 5 seasons.

Easy peasy to reload or keep them for a few more years.

A very good looking rotation that could stay around for years and stay tops in the game with proper additions.

So much depth and relievers are so easy to come by in FA.

All the Yankees have to do is retool right and they are going to be title contenders or the next 15 years.

Here’s what’s on the way in the Yankees system as well:

Can you see now how no team’s title window is only 5 or 6 years?

The Yankees are currently set up for a 15+ year title window run! The Yankees run that really starts in 1995. So over 30 year run.

Stop the lies only 5 or 6 years. Its simply not true!