As we look into Yankees prospects we cannot ski[ one of their best or so they say in Estevan Florial. 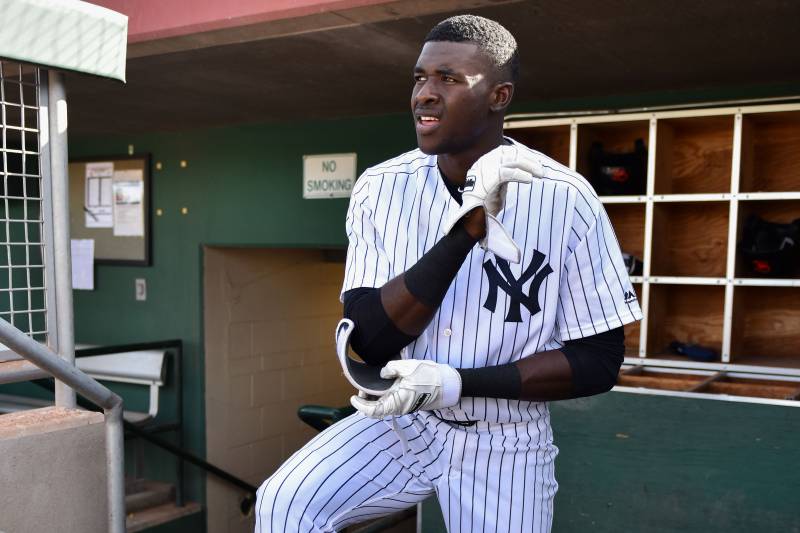 Florial’s quite the prospect who’s had a up and down career. He’s a 6’1″ LH  hitting OF. A International signing back in 2014.

He projects to amazing stats when calling Yankee stadium home. His projections are .298 BA 28 HR’s 92 RBI’s on average due to stadium effect and such. His tops in any simulated season using standard software: .339 AVE 41 HR’s 121 RBI’s. Impressive but again stadium effect.

He’s got amazing speed having stolen the bag in 73 of his 103 attempts. That’s slightly above the MLB average of 70%.

Defensively he’s one of the best defensive CF prospects in the game and f not the best. His fellow Yankees farm hand Jasson Dominguez should pass him before to long.

The player in the game he most closely projects to is actually Mike Tauchman but with far, FAR more ability! Florial projects to put up far, FAR better #’s.

So when could we see him in the Bronx? This is incredibly hard to say. He hasn’t progressed near fast enough as the Yankees wanted. He could debut this year but far more likely in 2021. IF EVER! I’m no longer sold on him ever playing in the Bronx. Especially with Tauchman, Frazier, Amburgey, AND EVEN Dominguez ahead of him. It looks bleak for him at this point.

When I look at his future its very hard to predict but I see him now as trade bait only. He’ll be traded from what I can tell in a package for Lindor, Arenado, Hader or ETC…