As we push towards FA, Mike McDaniel is already hard at work assessing his new team and QB! He is already looking at players and figuring out where things stand. 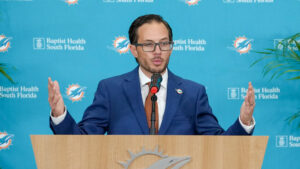 Just a few minutes ago I was informed He is going to be meeting with QB Tua Tagovailoa to go over game film and see where his head is at during the plays. This is great news for Tua and and the Dolphins.

I can say this much, they are hard at work in all aspects of the gam right now!.

Source say Mike McDaniel wants to get a full read on IF Aaron Rodgers is the guy or if Tua can be. This is a great 1st step.

We know he already has been meeting with THE BEST DB IN THE GAME Xavien Howard and the plan is to keep him. Extension talks have already started there as well!

Chris Grier speaking with Xavien Howard on new deal, expects him to be a Dolphin in 2022 https://t.co/LZ1yga6ZJW

Also McDaniel wants Mike Gesicki to stay and are in convo’s with him and Emmanuel Ogbah on extensions:

Chris Grier, Dolphins GM: We have had more talks w the agent for Emmanuel Ogbah than Mike Gesicki

The work has just begun and is roaring. Both players could be franchise tagged if deals cannot be reached!

So it looks great early on for Dolphins fans!