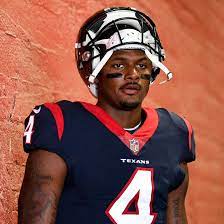 Very interesting signs abound for the Miami Dolphins and Houston Texans. Signs point towards Watson being traded with the Dolphins, Panthers, ETC believed after him. Now it gets stranger! Just look at this:

Good move to add a guy who can start if necessary 🤔 https://t.co/nVCw18DLjK

HOW AND WHY? HOW DOES THIS MAKE ANY SENCE?

Just 3 days ago the Dolphins acquired Bednarik McKinney, a 6’5″ 268 Pound Linebacker, FROM THE TXANS from DE.OLD Shaq Lawson.

As such we know the sides are in contact.

Sure sounds like he sides 100% have a deal in the works and maybe even one of the 3 variety.

Are we looking to much into this? NOT A HCANCE!

Here’s just one such tweet indicating something is going on:

I wonder why the Fins are saving cap space? Hmmmm? #DeshaunWatson to the #Dolphins perhaps? #MiamiDolphins

I could post hundred’s of these even from big time reporters.

As I mentioned earlier its not just the Dolphins who may be after Watson either.

According to ESPN’s Jeremy Fowler, Deshaun Watson is “intrigued” by the idea of playing for the Panthers. Fowler stated on Sportscenter “The Carolina Panthers, they are inclined to big-game hunt for Deshaun Watson if he’s available.” pic.twitter.com/LExOX70sTK

The Panthers, Lions, Giants, Falcons, ETC have also checked in on him.

Just sayin its looking more likely then even Watson is on the verge o being traded!

Never forget Watson has said several times this offseason he will not play for the Texans again. He cleared out his locker as well.

The Dolphins among other are also eerily SILENT right now. Just sayin.

And now the Dolphins make a move signaling Tua is bout to get Traded:

And now Brissett agrees to terms with Dolphins, as Adam Schefter noted. https://t.co/4CTYfALaum