As we woke up this morning we got some startling news. The BIG 12 is again talking expansion and BYU is at the forefront. Lets talk about what we know and what to expect.

Why now would the BIG 12 choose to expand? There’s a few reasons.

Big 12 is ready to look at expansion again. Its membership GoR and TV deals are coming up. There could be word as soon as Media Days about an exploratory group.

*ESPN paid the Big 12 not to expand in 2016, "indirectly" buying the AAC time to strengthen. That time is running out.

As you can see ESPN is literally FORCING IT through their contract with the BIG 12. The BIG 12 has no choice. Also they are getting added TV time as well once they expand which =’s tons and tons of $$$ for the conference!

So what do we expect from here?

Lets start with this map of the potential BIG 12 expansion teams: 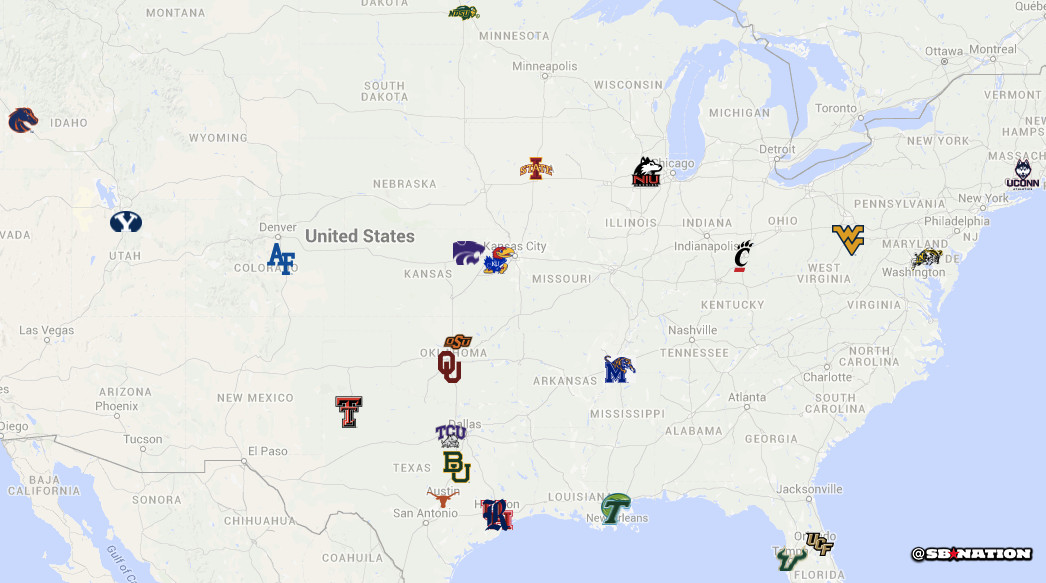 As you ca see BYU and BSU easily, BY FAR make the most sense.

Looking back 5 years ago, the last time the BIG 12 tried expanding, BYU got 9 out of 10 possible votes. 8 is the minimum for an invite to join. BYU would get WVU’s vote if they agreed WVU only had to head to Provo, UT every 3 or 4 years. Easy peasy for BYU!

Here’s a break down of the voting from 5 years ago:

This is what was reported back when they discussed it. Bob Bowlsby emphatically stated the BIG 12 never voted when everyone and their mother knew they did from the college president’s admitting to it.

Its confirmed now. Expect as major BIG 1 2reporter Austin Cox said that major announcements will be out soon. VERY SOON.

This being said… What do we have to expect moving forward now that we know expansion is here?

Well if the BG 12 only expands back to 12 teams then its almost certainly BYU and BSU are the invitee’s.

Should the BIG 12 decide on 14 or 16 teams then its a certainty they are after BYU and PAC 12 schools such as Arizona, ASU, and USC AND UCLA OR… are after both UCF and USF along with BYU and BSU.

The process should be interesting but word around the NCAA ad the BIG 12 is they would like to expand for the upcoming season. I know for a fact BYU is all ears here.

As this unfolds we need to pay close attention to how many teams they decide on as that will drive EVERYTHING in the process though BYU is a lock no matter what per BIG 12 sources. Baylor and TCU are in BYU’s pockets as well as fellow religious schools who refuse Sunday play.

Have patience guys and be ready for anything here.

Finally… By adding BYU in Basketball as well as football helps the BIG 12 further distance its self from the rest of college hoops as the marquee college basketball conference as well. More reason’s BYU is a lock!

There is no way BYU misses out this time but let’s hope and pray the BIG 12 follows through this time!