As we watch Trevor Bauer’s career crash and burn before our eye’s I must caution everyone the real story is not yet out and may never be.

So what is the true story?

For starters yes he is 100% guilty of harming a woman in multiple ways. MULTIPLE WOMAN IN FACT. As such the MLB is black balling and banning him from the game. Japan is where he’s headed now.

Think about this: why did the DA wash his hands of it? Not even try to take it to court? Questions that must be asked but what are the answers?

Well… its believed and somewhat known he cut a deal with the DA that there be no criminal charges in exchange for him leaving the MLB and heading to Japan as the MLB wanted. Bribes maybe? We’ll never know!

Just think about this: Japan’s portrayal of women throughout history shows he will be forgiven. Their views on his media haven’t changed though. There wouldn’t even be a need of a restraining order once he’s in Japan. He knows his fate. Just wants to save as much face as possible. Get it yet?

Per Cubs OFer Seiya Suzuki though a source: “Japanese people wouldn’t even understand what he did!” and to that I add: For that matter they will never know the story.

So what did he do? He definitely abused woman sexually. He hurt them and is covering it up. That said no I do not believe the story in the Washington post news. This one:

It seems far fetched and made up. There’s no possible way they have that much info yet. Nor do I really believe a new suitor has come out now though it fits a pattern of a sexually confused man abusing woman.

Also it’s worth noting Rachel Luba one of Bauer’s agents has emphatically refuted this article:

Not only do you write about uncorroborated claims and blatantly ignore contrary evidence that undercuts your narrative, but you also completely misrepresent the exact words of a judge from a transcript you have. pic.twitter.com/4EpKDsPCXp

Now I have to point out no Judge has ever seen this case as it never got to court. and thus Luba is dead wrong there but she did find a contradiction in evidence so great job with that sleuthing.

I also must point out that Trevor Bauer himself refuted this BUT… you can easily tell half of what he says is straight up lies due to the feel and how he says it in complete defense mode:

While I was training for around 7 months for the UHP one of the UHP trainers told us this:

I will always remember this and realize a man guilty of such crimes is going to lie. There was no reason for such a long statement by Bauer. It is what it is though.

There’s another side to this as well… THE MLB!

Thus I have to ask what in the world does the MLB know to issue a 2 year suspension topping A-Rod for the longest suspension ever issued? They have to know he’s guilty and such.

THE MLB KNOWS THE WHOLE STORY TO ISSUE THIS! THEY HAVE TOO!

Remember when other abusers known abusers only got a month or 2 or maybe 3? Here’s a list of them (NOTE: Sorry its so fuzzy. I tried to fixed it but could not. Its a format error.): 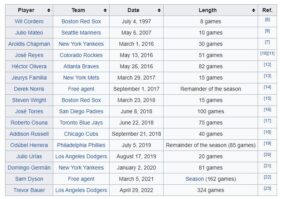 I must 1st note on this that Aroldis Chapman was proven innocent by 4 police reports and 8 eyewitnesses! He should not be on this list! Yet he still got 20 games somehow. I guess for shooting a whole in his garage wall.

Notice though no more then 3.5 months for ANY OF THEM till Sam Dyson and then now Bauer who got 2 years!

Why 2 years for Bauer unless its worse then any of us thought?

Now the whole Trevor Bauer story will never be public. This is fact thus the Washington Post article is not completely true. Its full of guesses and stuff made up to extort Bauer.

Do I believe a girl wanted rough sex from him? YES! Did Bauer take it to far? BY ALL MEANS YES and that is a crime. That said the Washington post hyperbolized to have a better story then they had.

Also I believe this latest accuser only trying to get money out of Bauer. The courts and such would’ve known a year ago about her otherwise.

Be VERY careful about what you believe about this story. You will never here the complete truth form any side.

I am telling you the known truth that the MLB knows he did it, is black balling him and forcing him from the MLB, and banishing him to the Japan leagues where he will be a star anbd they won’t care about this case.